By Dora Vakirtzi, President of Institute on Social Dynamics

The Institute on Social Dynamics is a think tank on social dynamics.  It analyzes, studies and propose solutions to social problems that hinder Social Dynamics. Based on these, it plans and implements projects with relative scope.

Working on social problems that block development of industry in Greece we noticed some findings quite relative with those found when studying Minor Asia Catastrophe, like poor management and leadership skills and most important the low social cohesion. On the other hand, It is well known that Human sciences (History is among them) could develop creative and critical thinking , which is necessary for successful innovators.

Furthermore, Greek Enterprises are working hard for survival and development in conditions of local economic recession in very competitive international markets. Managers have daily to make tough decisions fast. It is quite common in developed countries, managers to study wars, important battles, strategy of successful marshals to be inspired  from  their successful or wrong decisions.

Studying Minor Asia Catastrophe , we realized that from this emblematic period that changed the map of Hellenism and had quite tragic cost , we can use several case studies for management , leadership, HR and crisis management.

So on October 2nd at Estia Neas Smyrnis , The Institute on Social Dynamics organized   conference  with the theme “  Minor Asia Catastrophe as pedagogical means in Management, Leadership, Crisis Management and HR”

The excellent speakers participated were:

Mr.Zafeiris presented the necessity of an holistic approach and careful planning on Industrial development, setting targets on most favorable sectors where efforts should focus. State has to offer flexible services supporting and not manipulating private sector.  Furthermore, it is crucial for small enterprises to overcome obstacles arising from their small size through collaboration with others. He also underlined that the most proper development model is the one based on differentiation and added value products/services where creative thinking is precondition.

He noticed that working systematically state and private sector towards  these directions, we can develop again industrial production that can stand out in global markets.

-Dr. Vlassis Agtzidis , Historian, Author of 16 books, awarded by Academy of Athens for writing the  (http://kars1918.wordpress.com/)

Dr. Agtzidis noticed that Minor Asia Catastrophe on 1922, was the real and symbolic end of a great historic procedure, associated with the final entry of Near East to nation-state era.

The transformation of multinational, islamic Othoman Empire was not peaceful and bloodless. It was associated first with the collapse of internal reform efforts, due to the emergence of a novel militarist nationalist movement, the one of the Young Turks.

The Young Turks tried to solve the national issue with the extermination and exclusion of populous Christian communities and forcibly convert the multi-ethnic Muslim populations in  Turks’ nation. This internal procedure led to unprecedented homogenization methods of the society, methods that humanity will realize a few decades later by the absolute horror of the Holocaust.

Historical starting point is the military coup of nationalist Young Turks in 1908. The physical extermination of Christian populations in the Ottoman Empire was decided and planned in order to reduce the financial strength of the «slaves» by imposing forcible transfer capital from Christians to Muslims and build a Turkish bourgeoisie.

The Greeks of the Ottoman Empire before 1914 were about 2.2 million in a total population of about 10 million. Their economic power was greater than their population proportion. It is estimated that 50% of invested capital in industry and 60% in manufacturing industries belonged to Ottoman Greek communities.

At the same time the Greeks in Greece were 4.5 million and lived in a completely different way, concerning  social and civic terms. The productive forces were poorly developed like other structures that were essential for a nation-state. The actual structural weaknesses will lead to an ideological «overcompensation» based on ancient recall, the revival of a dead past as compensation to real cultural identity of Greek centers outside Greece itself. It will also establish self-recognition by the ideology of the «metropolis» as a superiority feeling.

The key feature in the development of the Greek society is the absence of major urban strata. This will lead to overactivity of the state sector, thus creating strong bonds between free market and state-party function. The policy of the new state was quite introvert. There was only the emergence of Bulgarian nationalism that claimed territory of Macedonia and Thrace, that motivated forces in Greece. There will be a severe rupture between old conservative policy represented by monarchy of King Constantine and reformists represented by El.Venizelos.

The internal contradictions of the Greek Hellenism will lead to a loss, which was not predetermined at all.

The Government of Popular Party that elected in 1920 will follow completely irrational policy which finally led to Kemal’s victory and Minor Asia Catastrophe. After that the Greek state chose a policy of oblivion.

Mr Kakaris noticed that similar attitudes we can see in business field today eg lack of collaboration culture, insufficient knowledge of competition and global markets and trends, inferior management skills , missing  crisis management knowledge. History is our society’s experience and  this knowledge should be exploited.

Literature brings us the experience and the feelings of people who live the certain historic period . This autobiography is quite interesting due to the long duration (1917-1924) and the variety of experiences the author had. Studying it by HR theory , Mrs.Lekanidis showed that the author succeeded to survive due to  certain skills and attitude (team mentality, solidarity ,emotional intelligence, continuous shelf improvement etc), which are also  valuable remarks nowadays  as we have to overcome current crisis difficulties and react t with a creative way.

Managing it should take  in consideration the needs of these people but  also  their different cultural and in some cases their effort to  establish in Europe values quite different from European ones.  Just for managerial issues, state could use the skills of officers trained to manage big human groups.

–Dr. Nikolaos  Uzunoglu, Professor at NTUA ,Division of Information Transmission Systems and Material Technology. He is also President of  Ecumenical Federation of Constantinopolitans.

Dr.Uzunoglu said that organizing commemorations for historical events like Minor Asia Catastrophe is useless if the scope is not  learning  from mistakes. Under this concept:

-Study of these facts should teach the importance of dialogue at national level to avoid divisions. This is primarily an issue of democracy, the development of perception dialogue and the importance of avoiding frontal collisions. Equally it means avoiding demagogic and populist attitudes and understanding of their consequences as in the case we are considering.

– History should be taught not as a series of events but  to disclosure mechanisms acted and act in  their configuration.

–Concerning Military Schools and Political Studies , there should be will be organized courses that enable students’ critical thinking about events like this. Especially in military schools there should be taught contemporary history of Turkey and the Greeks of Near East in light of the above principles. Postgraduate studies should also be offered for the above mentioned issues. 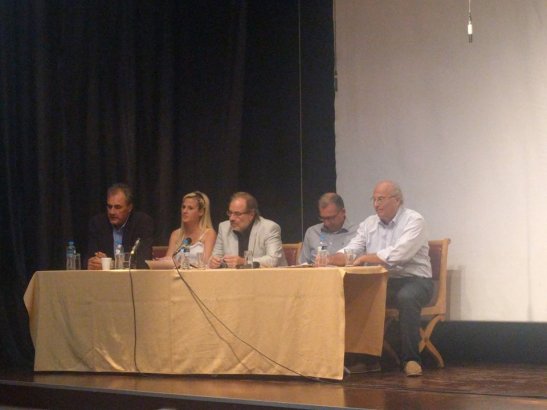 In parallel with this conference , The Institute on Social Dynamics organized an exhibition in collaboration with Mr. Nikos Kardasilaris, businessman and collector. A small part of Mr.Kardasilaris collection was presented under the theme: The Greek Posts in Minor Asia the period of expedition 1919-1922. The exhibits offered supplementary information and the emotion of “touching “ the traces of history.